A soft-spoken airline agent gestured toward me.

“You don’t want to miss this.”

She saw me sitting alone, my eyes wandering out the window. Perhaps seven or eight airline employees gathered by massive floor-to-ceiling windows. “We always watch the sunset together,” she explained.

Several snapped photos with their phones.

The sun grew and glistened, the planes shimmering in neat rows. The endless crowds, congestion, and noise of LAX disappeared. It was just a few moments of collective appreciation of the planet. From there, flying took on a renewed, human quality. I took off that night, staring out at the stars from the window seat. It was a sensation of immeasurably profound calm.

The first time I was old enough to remember a big trip, I was sitting with my mother at Kennedy Airport. Only the nose of the 747 was visible from the window. It seemed like an improbable means to take flight, and I wondered if the “real” plane was hidden behind it. This was all some illusion.

Nobody had told me that the flight would take place at night. It seemed like an absurdly bad idea. How would we find our way? How would we avoid bumping into another plane?

Fatigue must have set in, and I nodded off.

I awoke next to my father, my ears popping. As I stared out of the window, I was transfixed. The wing had moving parts that extended and screeched. Wafts of mist shot across the wing surface. Fog and clouds spirited past the window. Beneath us lay something even more extraordinary: houses, electrical wires, grass, cars, road. We were landing in Milan, but I had no idea what to expect. I was dumbfounded that Italy had certain familiarities from home.

The Foreign and the Surreal

A couple of years later, I visited Heathrow Airport for the first time. I was perhaps about nine years-old. The experience of flying took on a particularly enthralling mystique. Unlike anything I had seen before, digital signs heralded flights to Harare, Bratislava, Caracas, and Leningrad. There were planes from “forbidden” port of call: an Illyushin jet from Aeroflot taxied into a nearby gate.

The next morning, we sat outside at the New Stanley Hotel in Nairobi. My family pointed out that the crew from British Airways was at the table next to us. It was like seeing a primary school teacher at the movies or supermarket. They were in casual clothes, having a beer in the African sunshine. It made little sense. In my boyhood imagination, these people lived on the 747. They would not wear anything other than deep blue uniforms adorned with ties and scarves styled after the Union Jack. Everything became even more magical and mysterious.

My family was quick to indulge my fascination. My uncle would send me unused invitations to the business class lounge in Bucharest (aware that I was unlikely to have a Romanian holiday anytime soon.) My grandfather would take me to the airport to see the rare appearance of a DC-10 from JAT, an erstwhile Yugoslav airline. A neighbor who worked for El Al would tell me stories of his own travels on employee tickets. My grandmother shared stories of the furious immigration officer at Sheremetyevo Airport in Moscow.

Somehow the sparkle became routine, a hassle, bourgeois cocktail conversation. As I grew older, flying became about hassles, garnering points, and dodging high fares. As I grew larger and more discriminating, the size and pitch of the seats became bothersome, the food avoidable rather than interesting. I was once fascinated by the stamps and carbon copies by ticket agents, this gave way to endless crowds, and frustrating hassles.

As aviation terrorism resurged on US shores, I lost my interest with the unusual security procedures overseas, I developed particular fury with the nonsensical, humiliating, and seemingly endless antics at the hands of the Transportation Security Administration.

It took a moment that evening, standing and watching the sunset at LAX, to find the mystique and passion from the jumbo jets we board every day.

The anxious clenched fists I felt as I stepped aboard a 747 as a little kid are best explained by the unthinkable scope of what it means to travel today. It is both mundane and astounding.

As an adult, I was sitting next to my father on flight from Newark to São Paulo. “How many dishes and plates do they go through?” He asked. I did not have an answer other than “a lot.”

Flight 85 is the most familiar to me. Every day, a Boeing 777-200 takes off from Gate C9 in Tel Aviv just after noon, arriving at Newark just after 5:00 pm. Depending on the time of year, the flight takes about 11 and half hours.

Shortly after 9:00 am, the check-in counters open. Two hundred sixty-seven passengers are interviewed by the Israeli Airport Authority, their bags are weighed and tagged then screened. The passengers walk downward through a security checkpoint, immigration control, and then to a massive fountain-filled rotunda bustling with 24-hour, seven-day duty free shops.

About 90 minutes later, roughly 18 crew arrive, having spent the past 24 to 30 hours asleep, on the beach or touring Israel. There are typically two pilots, two “relief” pilots, at least four plain-clothes Federal Air Marshals, a purser or “Inflight Service Director,” about three Hebrew-speaking flight attendants, and five international flight attendants.

From the upper level of Ben Gurion Airport, the 777 is not particularly imposing. The airport is full of jumbo jets in the Middle Eastern sunlight. Unlike my fear of the 747 at JFK, the plane looks airworthy. From such a height, one can hardly perceive its 64 meter length (210 feet), and even greater wingspan. The engines themselves are seven meters (24 feet) in diameter. It seems implausible, but four of me could stand head-to-toe inside the engine.

As the ground crew starts preparations, the 777 will require about 220,000 pounds of fuel. This is measured in pounds in part for convenience. It is roughly the equivalent of 1,493,800 gallons. (5,654,648 liters). According to indexmundi.com, the cost of fuel would be $1.30 per pound or $286,000 for the flight. That does not account for the likely higher cost of Jet-A fuel in Israel. At $1071 per passenger just for fuel, suddenly the actual cost of the airfare does not seem quite so extortionate.

Roughly 45 to 60 minutes before pushback, a mix of crews from Quality Airport Services (QAS) and United Airlines start loading the 267 passengers: checking passports, asking few security questions mandated by the US government, and a glance at hand luggage to ensure that passengers comply with US laws about liquids. In an unthinkably fast 45 minutes, each wheelchair is stowed, each stroller is collapsed and tagged, each forbidden water bottle is discarded, and passengers negotiate with their neighbors to swap seats.

Despite endless web sites full of vitriol and ratings, the cabin on flight 85 offers the unimaginable. Passengers plug in to electrical outlets, log in to WiFi, flip through page after page of “on demand” movies and television shows.

It is easy to forget that this is occurring at 560 miles per hour (901 kilometers per hour.) This is just about three quarters of the speed of sound.

All of the Above Quadrupled

Perhaps the most remarkable fact is that a sister flight, number 91, will take off with another 267 passengers just under twelve hours later. Meanwhile, their counterparts (84 and 90) are flying from Newark back to Tel Aviv. Every day.

That means 1,068 passengers per day, every day, on just one route. In the roughest estimates, that is 2,136 hot meals, 5,000 paper napkins. If just half of the passengers participate in a frequent flyer program, more than three million miles will be earned.

Six days per week, the same route is replicated by El Al Israel Airlines, carrying at least an additional 279 passengers per direction.

That is one route on one day of the week. 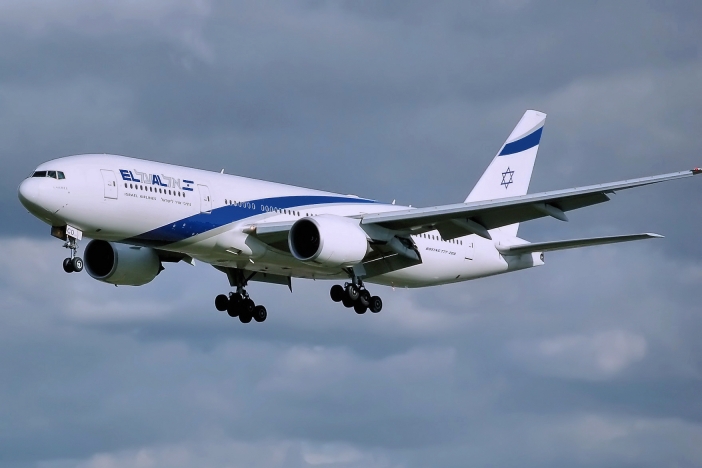 Look out the window.

There is both joy and peace to be found amid the clouds. The views are unparalleled, particularly the sunsets.

There is a certain shock if one considers what constitutes a “routine” flight. It is so complex that one’s mind cannot begin to imagine 5,000 napkins.

Take a cue from the enamored staff at LAX: look out the window; snap a photo of the sunset.

All images designated for non-commerical redistribution