The airline ticket from New York to Washington was $700. It was a trip from Midtown New York to a location near the Capitol in Washington.

The sensible options would have been a train or the one of the hourly shuttles from La Guardia to National.

“Sylvia,” an executive at a struggling nonprofit, insisted that she travel only on United Airlines, and she expected to fly in first class for the 40-minute flight. United does not fly “The Shuttle” between La Guardia and National Airports, and first class was not an option then. So she arranged for a ticket from Newark Airport to Dulles Airport, with limousines on both ends of the trip. This added almost 70 miles of extra time on the road between the airports and the city center, not to mention the airfare difference and cost of the limousines.

This was the final act of pathological frequent flying that led to Sylvia’s dismissal from her employer. For roughly a year, she had been flying once or twice a month from New York to San Francisco. The nonprofit had no office in San Francisco, but she would arrange to have meetings there. She never expressed any particular passion for San Francisco, no significant other who lived there, but she relished in the 2,500 frequent flyer miles she would accrue for each flight.

Although her social life was limited, she would invite friends or associates to lunch. Sylvia would insist on using her own credit card and obtaining cash reimbursement from her friends. The reason was to gain more miles with her credit card. She frequently bragged that she used her credit card at Starbucks every morning. A $4 “Grande” latte every morning could yield 1,460 miles… enough miles to go nowhere. It would require one latte per day for more than eight and a half years to redeem a restricted, one-way, economy class ticket within the 48 contiguous United States. But this was immaterial to Sylvia.

In fact, Sylvia had no grand plans for her miles. She was not a jetsetter, enjoying five-star hotels or luxurious first class flight rewards. Her interest was merely in accumulating the miles, and bragging about her “elite” status with United Airlines. Without a partner, close family, children, or other passions in life, the miles became a surrogate for her self worth. Her airline “status” was perhaps a substitute for a contribution to her community, science, education, the humanities, the welfare of others, or even a sense of self.

This was not a woman who was enjoying an art of a good deal, a special perquisite for loyalty to an airline, the freedom of travel, or an interest in airplanes. Her attachment was to the miles themselves and nothing more.

Until her Newark-Dulles first class escapade, Sylvia figuratively “flew under the radar.” The American middle class knows all about frequent flyer miles. It is perhaps unusual to see someone without an airline-branded credit card or no frequent flyer account. It is not a violation of a social norm to want miles for a free ticket or an upgrade to first class. But a subset of the flying population, Sylvia included, is what one might consider to be a “pathological flyer.”

Many people in the world are fascinated by travel, planes, and flying. It is a part of their lives and personalities. These enthusiasts are experiencing flying as an ego-syntonic phenomenon: they are comfortable with themselves and their lives, and frequent flying is part of who they are. Sylvia’s desperation and obsession was likely to be disharmonious with her personality and values and thus ego-dystonic. She was suffering from her need for miles and status.

I am no stranger to this myself. I grew up loving airplanes. I have old airplane photos in my office. I enjoy travelling to visit my family and see the world. I enjoy looking out the window, watching shiny jets at the airport, and I do try to snag a good deal if I can fly in first class rather than the back of the plane. At family gatherings, we often find ourselves musing over the best options for flying from one place to another, which airline might offer better service, and what research we have accomplished online to figure this out. It is perhaps just our lifestyle living on four continents.

Airline “Status” as a Sense of Self

Subsequent to Sylvia, I became particularly fascinated when I observed a 50-something woman enter a loud, distressed, and histrionic tantrum at an airport ticket counter. The agent had forgotten to affix orange “priority” tags on her checked baggage. I speak from experience that such tags are usually meaningless, but they were a “tipping point” for this woman. She made an explosive tirade in front of the crowded terminal, making a point of her high-ranking status with the airline’s frequent flyer program. 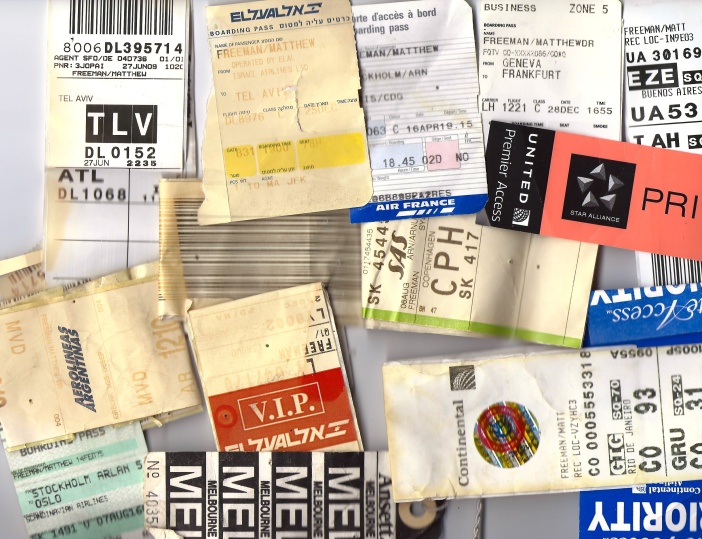 The treasured but meaningless orange tag

This woman frightened me. Her behavior was entirely dysregulated, she was impulsive, distraught, tearful, and inconsolable.

After she was escorted to an airline club, I spoke with an agent about her. “She’s lonely. We are like her family, so she expects us to be something more than an airline to her.” In a prior instance, she was incensed that the airline had no cake acknowledging her birthday.

The agent was insightful. “There are a lot of them,” she remarked. “It’s sad.” It turned out that this woman was going to Shanghai for a day… just to earn frequent flyer miles. As far as the airline knew, she had no business, friends, or interest in Shanghai.

When I returned from my trip, I presented her case in our weekly psychology case rounds. Although not our patient, I was equally fearful and fascinated by her behavior. The room rose with chatter. All of my colleagues had witnessed “pathological flyers.”

One of the psychologists on my staff compared it to gambling addiction. “She placed all of her chits into the frequent flyer game, and she did not get the payout she was expecting.”

I likened it more to histrionic narcissism. Narcissists cannot tolerate the smallest of slights, so failure to apply a meaningless orange baggage tag came across as an attack on her sense of her value as a person.

The Public and Private Worlds of the Pathological Flyer

In The Presentation of Self, Sociologist Erving Goffman defines human interactions in terms of a stage: front, back, and off stage. When living life on the “front stage,” people are aware that they are watched, in public, and they conform to social norms. But the anonymity of air travel erodes the front stage. Flyers—frequent and periodic—may lose this emotional regulation and go “off stage.” Like the problematic gambler who is otherwise living within social norms, pathological gamblers and flyers are easily disquieted when their expectations for winning are unmet.

Of course airports and airplanes in which people step “off stage,” to use Goffman’s analogy. The fatigue, stress of flying, and status-seeking certainly takes place at hotel reception desks, and most everyone can recall a histrionic display of entitlement involving the host or hostess of a restaurant. But the complexity and tension of flying lend themselves to maladaptive and disruptive behavior.

There was a common theme among discussions of frequent flyer behavior: special treatment. Flyers’ war stories almost inevitably included the story of how a ticket or gate agent broke a rule, held a flight behind, or offered some sort of other perceived act of heroism because the traveler was of adequate frequent flyer elite status to warrant treatment better than “regular” passengers.

There is a sad reality to this “status” based world. The Association of Flight Attendants (AFA), the union that represents the Continental Airlines subsidiary of United Continental Holdings, explained that passengers with the highest level of frequent flyer status had an extraordinary power: a complaint from one of these passengers could result in immediate termination. Although the union and the airline are still debating this policy, it is a powerful reinforcement of the “status-holder” psyche: “I am a high level frequent flyer, and if you do not give me what I want, you can lose your job.” The missing orange luggage tags could have cost someone his or her job. Ironically, United’s erstwhile slogan was, “You’re the boss.”

In the pathologic flyer’s mindset, rewards are based on status not kindness, altruism, or reciprocity. The system limits “self” to a tier in a frequent flyer program. In the simplest form of behaviorism, the only incentives are to have more miles and more status. Conscience, ethics, and the superego are irrelevant. An airline agent’s willingness to reroute a passenger, upgrade someone to first class, or provide a hotel room in the event of a mishap is not based on the passenger’s need or altruism. It is a caste-based economy.

The caste divisions are dynamic. Airlines change their requirements for various levels of “status,” thereby adding to an anxiety over losing one’s perceived social capital in world of air travel.

This is a climate largely limited to flying. I receive a warm greeting from the cashier at the supermarket on my block, the staff at the post office are pleasant, the barista on my corner knows who I am, and says hello. If I were to be short on change one day, he would likely help out. The woman at the supermarket on my block in Tel Aviv went to the back to get me a fresher loaf of bread from the bakery yesterday. None of this was based on my “status.” It was a matter of being a customer in their establishment. And I am (usually) calm, smiling, and say hello to each of these people. There is no status system to dictate how I am treated. Whether I was going to spend 100 shekels or 900 shekels, the woman at the supermarket was going to make sure that I got the better loaf of bread.

Furthermore, a tantrum over luggage tags would be met with rolled eyes rather than a fear of losing one’s job. Outside of the world of flying, there are plenty of histrionic “Do You Know Who I Am?” explosions, and they are usually met with clenched teeth by bystanders rather than frantic attempts to prevent the customer from filing a complaint.

Moving Forward: Taking the High Road
One of the cornerstones of behavioral therapy is to allow the patient to share his or her decision-making. In the case of an impulse control disorder, like hoarding of compulsive shopping, the therapist asks the client to “talk through” his or her own decision-making. “Tell me why earning these miles is important to you. What are your plans for them? What do they mean to you?” “How is this affecting your life?”

This pathway to insight can be accompanied by the reality that airlines are not the same as families and relationships. Airlines exist to produce revenue for their owners and shareholders. Indeed there are millions of kind airline employees across the world, and they do want passengers to be happy with the service they provide, but this is a job, an effort to make money, and not the same as social and family relationships.

But the pathological flyer is unlikely to seek care. Unless noted by a concerned friend or family member, or if the flying leads to sad consequences like Sylvia’s loss of a job, it is not likely to present itself to a therapist or primary care provider.

The airlines are tacitly complicit in the perpetuation of this pathology. A pathologic flyer, however nettlesome to employees and other passengers, can generate tremendous revenue. Unlike a slot machine, an airline cannot place a sticker warning of the risk of “problem flying” or a toll-free hotline to call for help.

If anything, this is a call for further research. The public and healthcare providers should be cognizant of the pain of the pathological flyer, and be prepared to intercede.